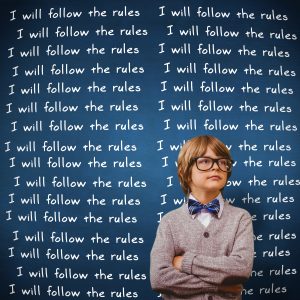 The irony is that many of the people who make up and teach these rules, are never likely to take the risks you might be willing to take.

Once when I was young, there was this building going up. It was just a steel structure bound by large bolts and welding basically an open frame. I was nine years old. I climbed it and got to the highest floor, five levels up. My father came looking for me because some of my friends told him what I was doing. He arrived, looked up and yelled “you should come down now”. I climbed down. My father watched my every move, when I was on the ground he said; “if you don’t tie yourself off you can get hurt and what would I do without you?” That was my fathers way of telling me not to do it again, unless I had a plan to stay safe. He was trained as a mountaineer in the military, he had no fear of heights. But he wanted me to be safe. That lesson stayed with me. I can still defy all the rules and take all the risks I want and still win, provided that I thought everything through. In my career, I have been held hostage and have had my life threatened twice. In each instance I stayed my ground and didn’t think about failure. All I thought about was that I was tied-off enough, not to fall. Harnessing yourself to principles that work for you will allow you to continue to defy all the rules. There are plenty of successful people and businesses in the world that defy all the rules.

Society is so bound by rules and institutional structured beliefs and they want you to make them yours. Educations can do that to us too. Can you imagine would Steve Jobs, Bill Gates, Jeff Bezos, Elon Musk even Henry Ford and others, have succeeded if they paid attention to all the rules? Never! Yet some how, someone may say they were just lucky!!  What happened to their hard work and ingenuity? Is that still luck? Or is it just damn smart people reading the dynamics of a changing world and applying their will to change it. Many will not accept that. Do you know why? Because they are afraid of taking risks, and most likely follow all the rules to the end because they have been told it is the only way the game is to be played or at least that’s what we’re supposed to accept  I see two problems in careers and business today. The first is what we may have been taught 2-3 years ago may not apply anymore. Second, we all need to be far more entrepreneurial and risk takers to succeed. This something that I believe most of those who like to follow rules will not do.

I believe rules, education and ideas age and they become redundant? So why is it when someone comes along and challenges the rules or even  breaks them,  society chooses to crush them because they don’t comply with commonly held old beliefs. That my friends is old school think and behaviour.

When a business comes along that no one thought would be successful, everyone dives in to understand how they did it. And then we apply all the rules to this business because we want everyone to believe that they followed those old rules. That’s just not accurate thinking.

I am not suggesting that we don’t need logical thinking.  We need well trained executives and time spent probing, discovering and peeling that proverbial onion to its core so that we understand what we are up against.  What I am advocating is this. If you want to succeed or help others succeed, remember just because the rules applied twenty years ago doesn’t mean that they still apply. Let Them Go! The only way to break this habit is to learn something new every year. That can be your life line to this new world.

I will leave you with this. I once made an acquaintance of an incredible individual. They started off very poor as a child, they learned about hard work and struggle at the age of Seven to help their family. But one skill they learned built them a business empire. By all accounts they were not meant to succeed, after all they didn’t have the pedigree, that big business persona that society expects them to have. They were once offered an opportunity to do their MBA and after a few classes they walked away. Why? Because they feared all those rules were going to get in the way of thinking unconventionally, something that has served them their entire career. They grew their business to an unbelievable value.  Were they lucky?  No, only someone playing by the rules would say that.  They had a vision, tenacity, experience and the will to take risks and defy the rules. They were tethered in to the current world.